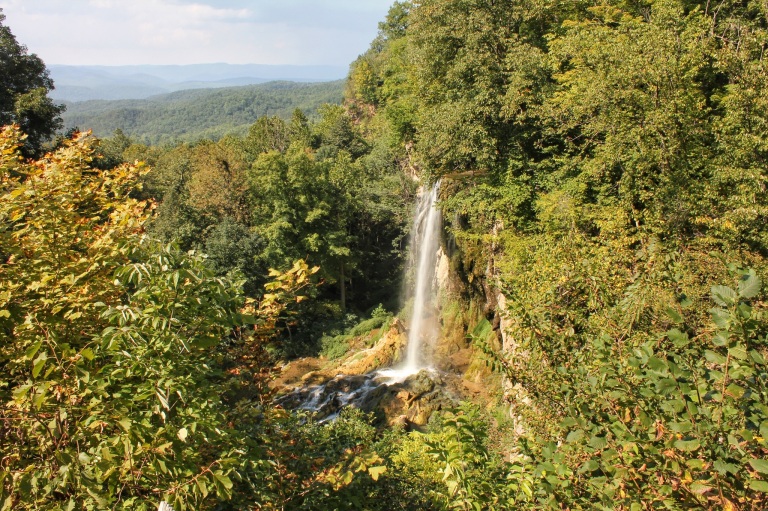 I’ve been taking some time this summer to visit our neighboring state to the north, Virginia. It does just happen to be my birth state. One thing I have noticed about Virginia, is that waterfalls seem to be…somewhat less abundant than in my home state of North Carolina, and in Tennessee. I have now found my way to 6 up here, and they have been most impressive. I have been to the Cascade Falls several times, and absolutely love it. I also have made one trip to the Crabtree Falls in Virginia, and really enjoyed the hike to the top of the many smaller cascades that make up this large waterfall area.  Some other trips into Virginia included hikes to Cobweb Falls, Little Stony Falls and the Waterfall on Logan Creek.  My latest trek took me well up into the Alleghany Highlands. This is a land rich in history, and has one of Virginia’s finest waterfalls, Falling Springs Falls. It is said that Thomas Jefferson was once enchanted with this place, I can surely see why!

END_OF_DOCUMENT_TOKEN_TO_BE_REPLACED

I hope everyone had a great Easter weekend this year. Hopefully you got a chance to get out and enjoy the great outdoors. My opportunity came on Saturday. END_OF_DOCUMENT_TOKEN_TO_BE_REPLACED 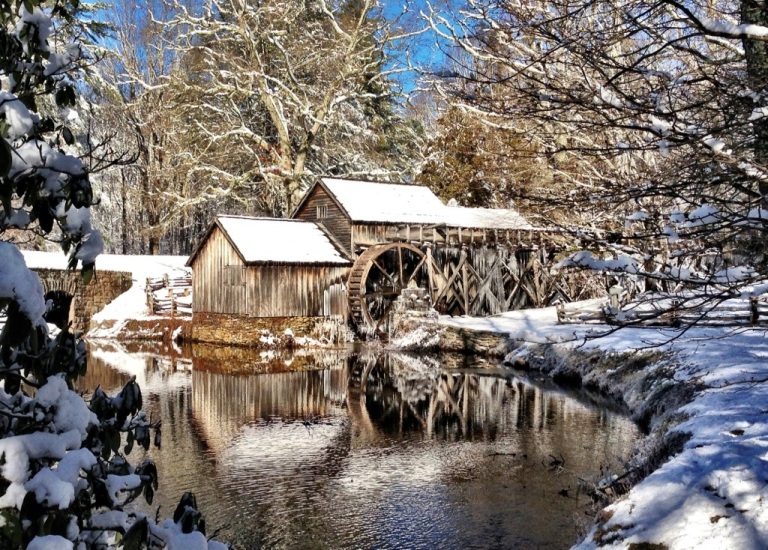 Well, just a week after we enjoyed several days in the 60’s and 70’s, change came like it often does. After 4 solid, I mean solid days of rain, it was coming to an end Thursday night. However, some arctic air slipped in with just enough time to cover most of the triad with a cover of snow ranging from a dusting to 4 inches. It was our first snow this winter and excitement was widespread. Saturday morning came, the sun was back out and I wanted to go somewhere. I decided a short trip to Mabry Mill in southern Virginia would be a nice as I had to get back early for other commitments. Mabry Mill in Virginia is a beautifully restored historical mill site along the Blue Ridge Parkway. I was seeing this place in my mind with just a little snow on it and a big smile came accross my face. Off we went. As we headed north along US 52 however, the snow was becoming more and more intermittent along side the road. Just past Pilot Mountain, the snow was gone. This was odd, as snow usually falls up here and misses us in the triad. Just as we passed the Virginia state line, still snow free, US 52 begins to climb. About halfway up the mountain, the snow began reappearing rapidly. By the time we reached the top, we were in the middle of a winter wonderland covered in 6-10 inches of fresh snow. The highways had been plowed thankfully, so travel was still safe. When I got to the BRP, we had a decision to make.

Mabry Mill was just a mile down the road, but the BRP is a National Park and does not get plowed. It is often closed in places in winter. Having been here several times already, I knew the grade was not steep through here and the snow on the road was packed, so I took a chance. Boy, was I rewarded! 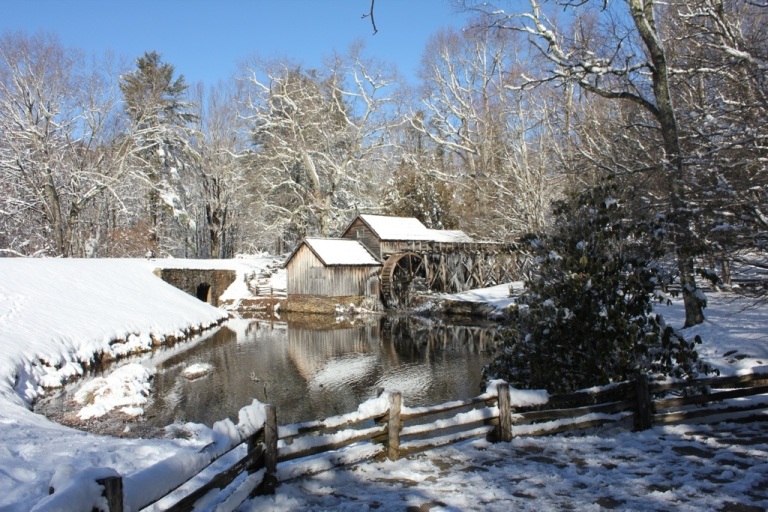 The views this day were far better than I had imagined. The snow was deep, fresh, and untouched. The sky was a deep and dark blue. Few people will see this beautiful place like this. I was blessed. After a half hour in the snow, the coffee in nearby Meadows of Dan was especially good on this chilly day. Soon after, we had to head home, but we stopped at Fancy Gap for lunch. The benches in the pictures below show just how deep this was. After that, our magical morning was over and the snow was soon a memory!!

New Years Day in the Tar Heel State was a washout this year. I have been participating in the annual “Get out and Hike” programs our state promotes each year, but not when it was raining like we had this year. So, my New Year Hike got pushed back a tad, to Saturday 1/5/13. This time of year, I usually head down to the southwest corner of NC, where the temps are a tad more moderate than the northern mountains. So why I chose to drive straight north to Northern Virginia on this day is totally beyond my realm of explanation. The waterfall in mind was Cascade Falls, a 69 foot waterfall that I had seen in a brochure last year that was absolutely gorgeous. The selling points for this being the destination were distance, and weather. The trusty iphone maps had it being a 2 hour trip, and the forecast was for sunny and 45…… In the mountains in winter, this is a nice day, trust me! Finding this location was pretty easy, coming from the south, I used I-77 to Wytheville, Va. I then headed north on I-81 for about 27 miles, got off on Hwy 100 north for another 20 miles, then took a right, or east on US 460 for 6 miles into Pembroke, Va. Once in Pembroke, look for Cascade Dr, hang a left and follow it for 3 miles or so until it dead ends at the parking area. There is a $3 parking/usage fee, it is totally worth it. The 3 mile drive up Cascade Dr, will give you a prequel to the rushing waters of Little Stoney Creek, and the treat you are soon in for.

And so the hike begins. From the bottom, you are looking at a 2 mile hike from the trailhead, to the waterfall, with a 700 foot elevation gain. That is nothing terribly dramatic, but it is enough to let you know that some uphill climbing is in your near future. Just a short ways in, you will come to a very nice wooden log bridge that crosses Little Stoney Creek, which is a rather large creek, no rock hopping to get across this thing. It is at this bridge where you have a decision to make; the trail splits here and you have 2 choices to reach the falls, I love that. The first is to keep going straight, along what is called the upper trail. It sticks to a rather wide trail, going way above the creek in places. Or, you can cross the bridge and take the lower trail, which hugs the banks of Little Stoney, for a much more scenic view. I chose obviously to take the lower route, because I am all about scenery. Once over the bridge, you will find a big, rusted metal piece of machinery under a shelter. I was thinking…what the hell is that and why is it here? As it turns out, this place was heavily logged in the 1920’s, and this boiler power necessary to run a large sawmill at the time. So it is a piece of history. The creek here along this lower path was just beautiful, with lots of rushing, clear, cold water, and huge boulders everywhere. It reminded me of the trail closer to home in South Mountains State Park that leads to High Shoals Falls. 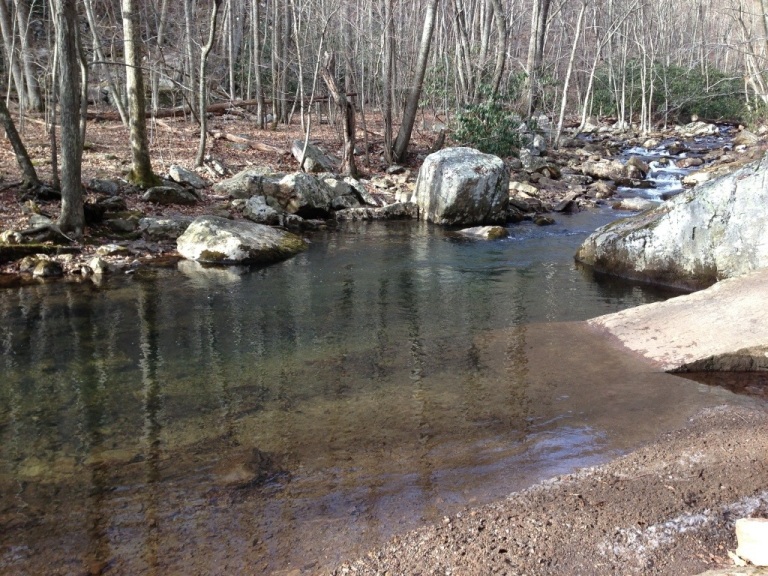 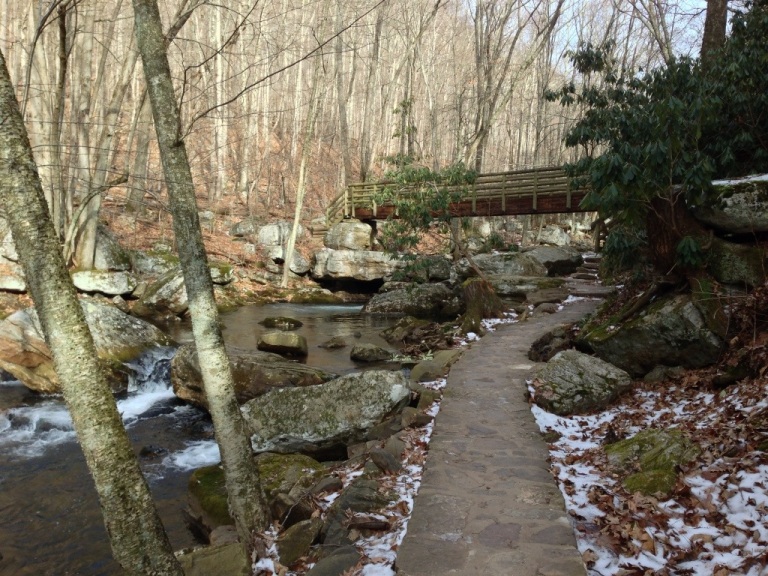 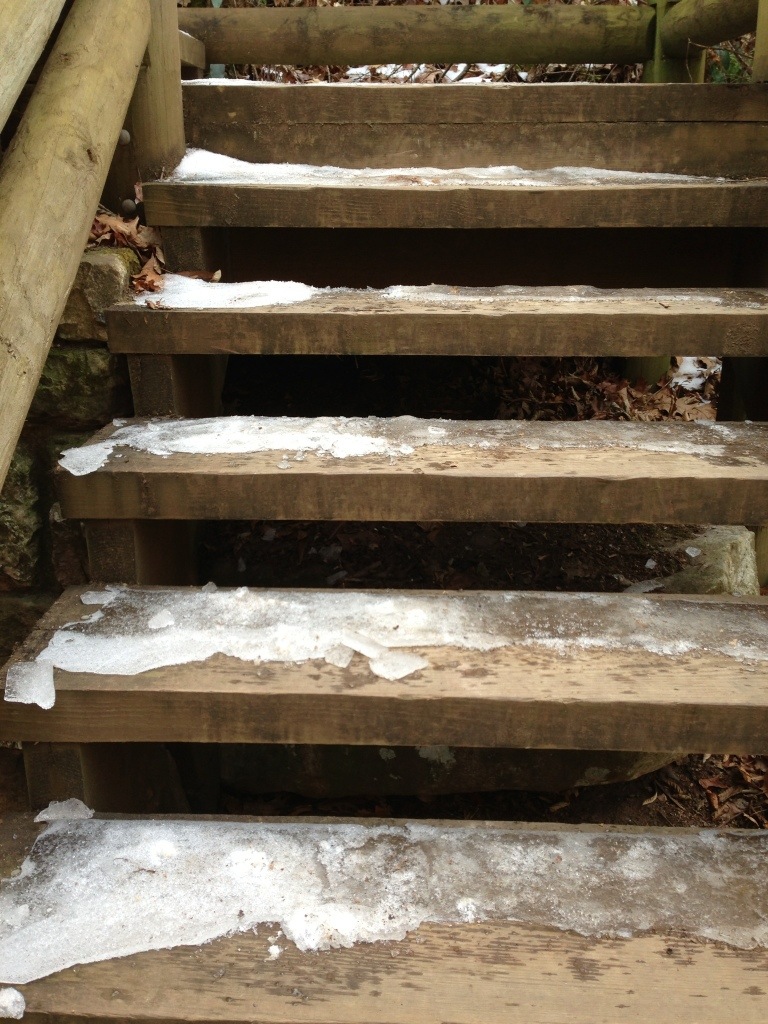 As I approached the halfway point of the hike, things began to change. There were large ice formations in parts of the creek already, but I began seeing snow on the ground. I thought this was a nice touch to help make this winter hike seem more…..wintery! Except, it kept getting more and more wintery! By the time I reached the second bridge, the steps, rocks and other parts of the path were beginning to get slippery and ice covered. The sign even warned me of this….at this point, I should…have switched to the Upper Trail for the safer, faster way to my destination. I did not, I stayed on the lower trail, while it got worse and worse. By the time I reached the falls, I would dare say that the lower trail was down right treacherous!!! I slipped several times, never falling. I came accross an older couple on this lower trail, and was thinking, “what the hell are they doing out here?”. They told me they do this all the time, had nice trekking poles and ice attachments on their shoes. The sweet lady told me I better get on the upper trail before I get hurt. Luckily, we all made it to the waterfall!! 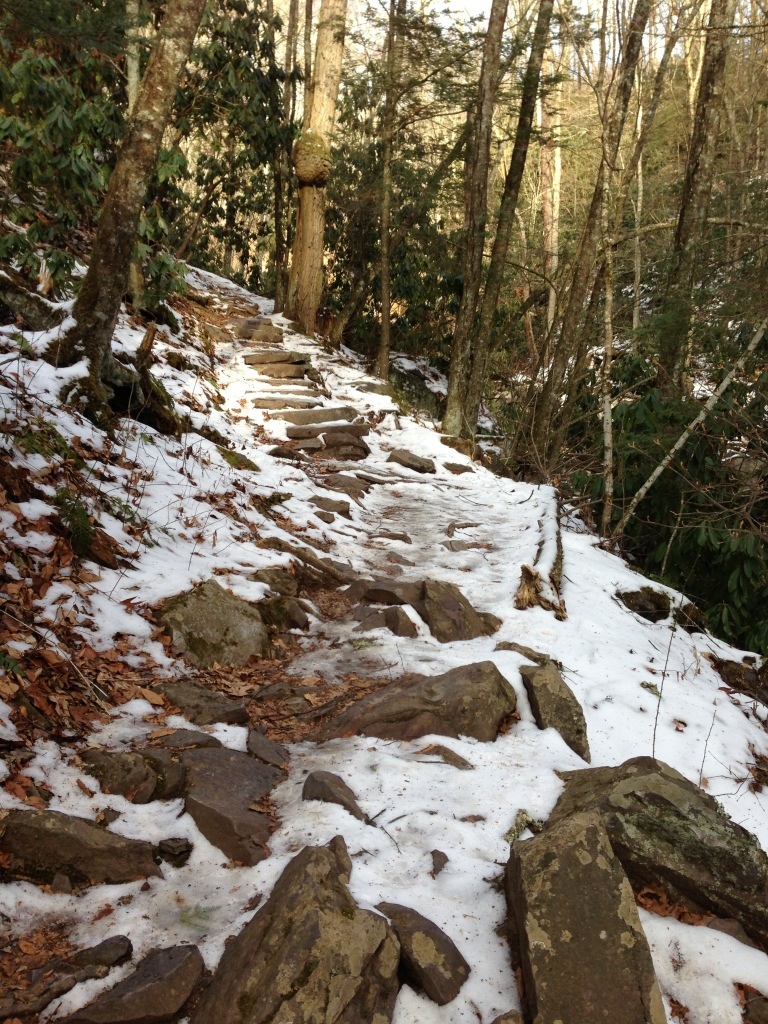 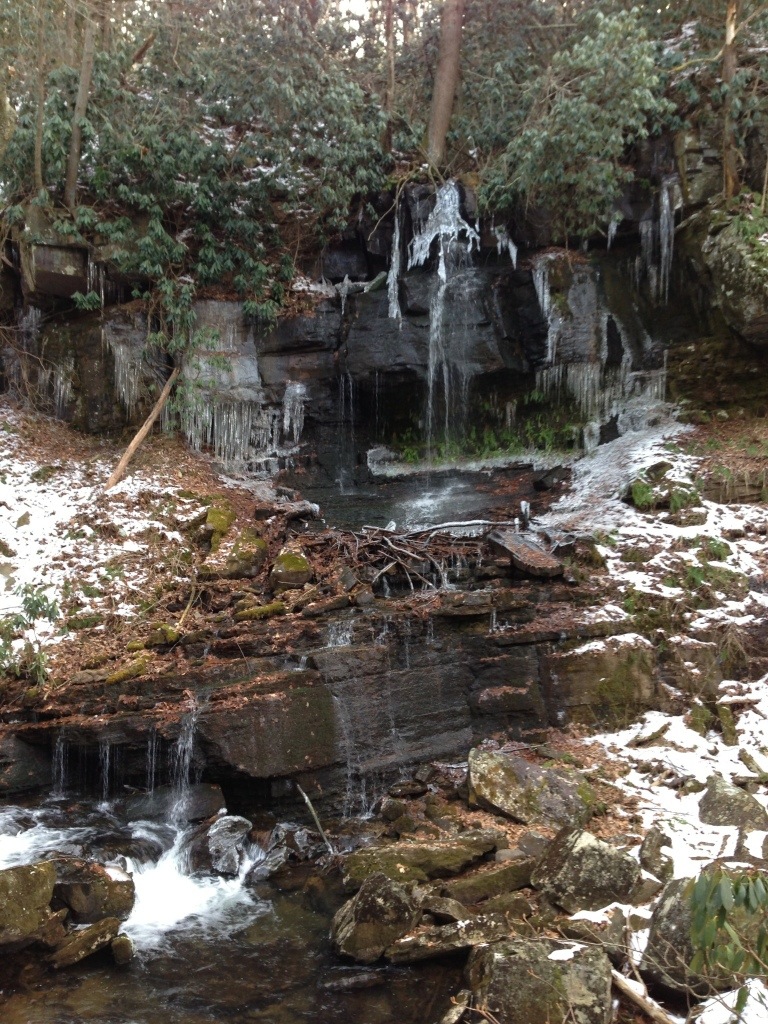 Then, just like that, there we were….Cascade Falls. The trail seemed to hide the roar of the falls. It was quite a beautiful surprise for me. I am not quite sure what I was expecting, but the largeness of the scenery, huge pool, big waterfall, and 200 foot icicle lined cliffs on both sides just made for an outstanding waterfall moment. There were several, very well constructed viewing platforms here with plenty of room for lots of people to enjoy this waterfall. It was fairly crowded on a day in which the temps here at the top were just above freezing at best. I can only imagine the crowds that would be here on a hot summer day. I wanted to get close to the waterfall, but the upper deck was closed due to ice. I am thinking it was the huge 50 foot icicles hanging above, I saw one of them fall. I would not have wanted to be under that.

After spending a half hour up here, it was time to head back. There was no way, I was taking the lower trail back down that ice, so I opted for the upper trail. It was far less dramatic, and got me back quickly. I believe that is probably the best way to hike this all the time, take the lower trail up and the upper trail down. I did notice a few people trying to climb the hill to get from the the lower trail to the upper on my way back. It was that slick down there where the sunshine is limited. Once back, I had completed a nice 4 mile hike to what has to be one of Virginia’s finest waterfalls. I can’t wait to go back in warmer weather. Some closing shots from the trip down, showing the totally different ice-free landscape.

Here is a picture from winters past when the waterfall was really frozen over. Glad it wasn’t that cold, but would love to see it like this still….