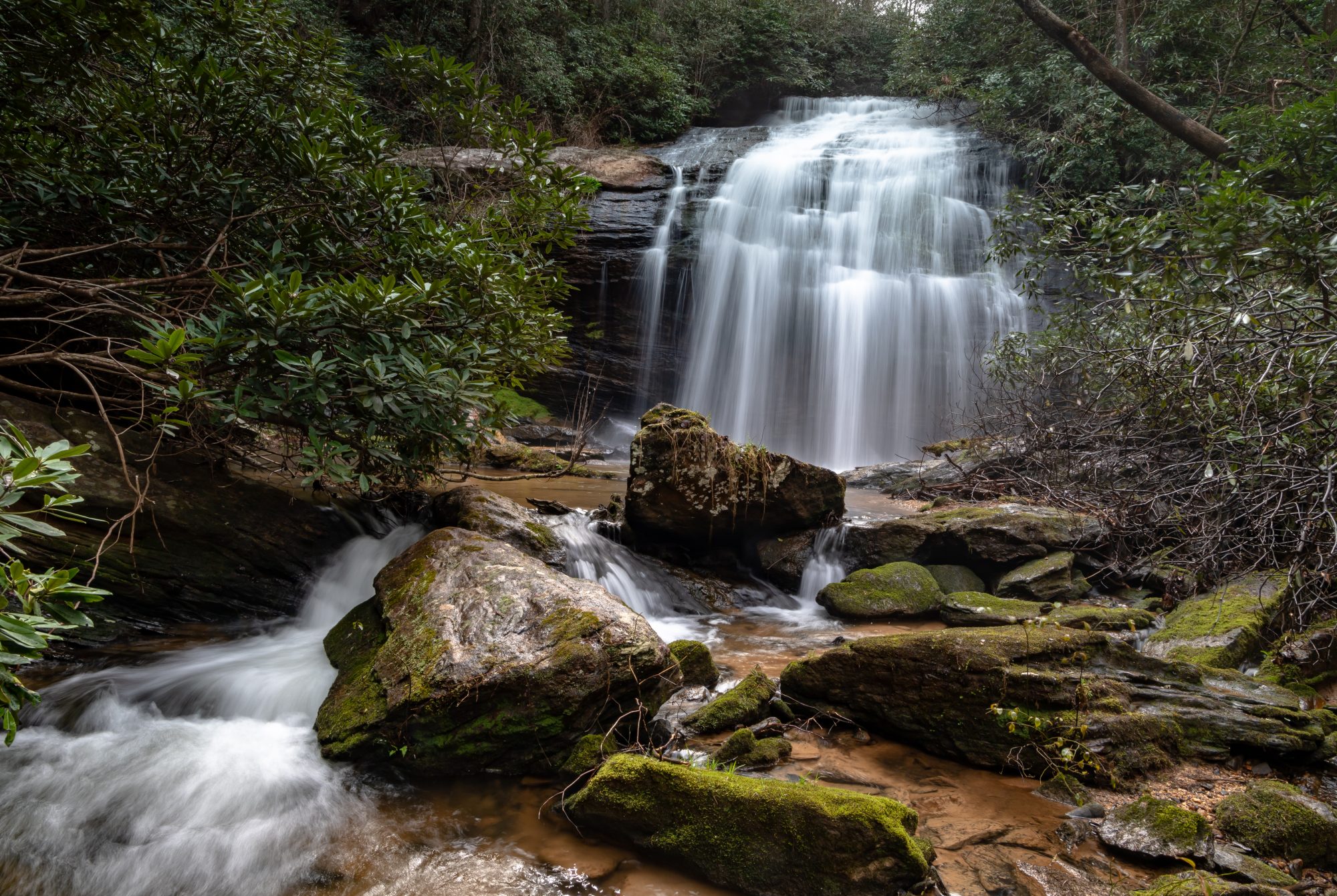 Bald River Falls has been high on my list of “waterfalls to see” for some time now.  This 90 foot high waterfall on a large volume stream has a very unique, defined look and has been calling my name.  I’ve also known that this is a roadside waterfall.  So what in the world has taken me so long to find my way here?  The drive…simply put.  Bald River Fall sits in southeastern Tennessee near a town called Tellico Plains.  With me coming from central North Carolina, the drive to get here is over 5 1/2 hours.  This is enough time for me to drive to Atlanta and have dinner as well.  What gives?  It’s all about those Great Smoky Mountains.  There are 2 ways for me to make it here: Drive up, over, and around the Great Smokies well into Tennessee, and arrive at Bald River Falls from the west. The other option is to shave a ton of miles off and drive a more direct route through and over the Smokies.  The rough terrain though makes this much shorter route nearly the same amount of time as the long way.  Obviously I needed to plan this out, stay a night, and take my time and enjoy this area.

I chose the long route, and it took forever….to get to Tellico Plains.  There was a nasty back-up on I-40 in Tennessee that changed my route.  This “detour” took even longer as I drove by a super large facility that turned out to be the Bush Beans Factory, and got sidetracked.  This was an interesting discovery.  I had no idea it was here.  I also can’t remember ever really wondering where it was though.  The Bush’s Beans Visitor Center is located on US 411 just a few miles south of I-40 in between Newport and Sevierville TN.  These folks here are proud of their beans.  They are good, especially those baked beans.   Just across the Highway from the factory, is a large visitor center with a museum included with all kinds of neat historical facts and displays.  Everywhere you look, someone was rolling that “Beautiful Bean Footage”. After a quick tour, some photos, and a stop in the souvenir shop, I was back on my way.  Although totally unplanned, I actually really enjoyed this place and would consider planning a stop here on a future Tennessee vacation.  If  interested or if you want more info, check out their site Bush Beans Visitor Center.

Once I finally made it to Tellico Plains, I found the Cherohala Skyway off of TN 68.  Once on the Cherohala Skyway, I took it for 5.2 miles and made a right onto River Rd.  I arrived at Bald River Falls in 6.2 miles.  River Road was a very scenic drive that ran right alongside the busy Tellico River the entire way.  The Tellico River was pretty much one rapid after another.  I could certainly see why there were kayakers scattered all up and down it.  River Road also went pretty deep into the wilderness.  Surprisingly the roads were in top shape, paved all the way to the waterfalls and beyond.  As you pass the 6 mile mark, the bridge I was searching for came into view.  It was covered in people.

My first view of Bald River Falls was a quick one. There were just too many people there.  I crossed the bridge that goes over the Bald River only to find not a single parking space to be found.  That’s ok, as far as I drove, I planned on staying until I got my turn.  Fortunately for me, I drove on just past Bald River Falls and found some open places to park in the parking area for Baby Falls, an added bonus treat.  Baby Falls is a nice sized 15 foot high, river wide drop on the Tellico River just above the confluence of the Bald and Tellico Rivers.  It was very bright out, and there were a lot of people there and kayakers.  It’s still always a bonus to see an unexpected waterfall. 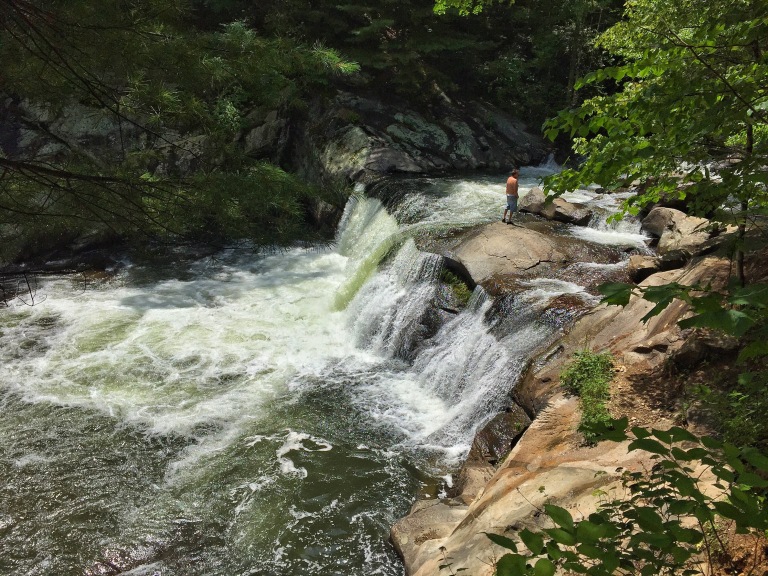 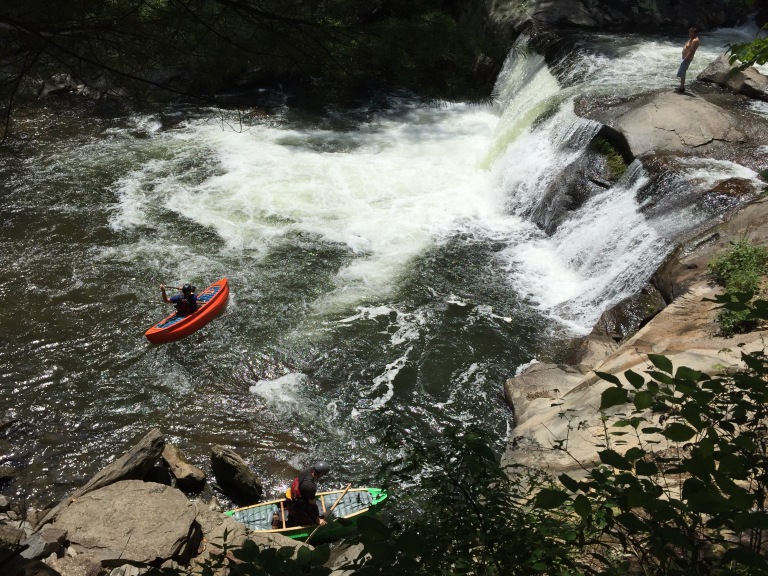 Here is a short video of 2 people running the falls.  The second guy maybe needs some practice..lol

This was all entertaining, but I was here for Bald River Falls, so it was time to make my way down there.  I went on and left my car parked at Baby Falls and walked the very short distance.  I made my way out onto the bridge and was not disappointed.  This was a beautiful, large waterfall with a very high flow today.  There was actually some waterfall spray to deal with a good ways down from the falls at the bridge.  This felt great but not so good for  photos.

It was very sunny and crowded.  I was not surprised by this, but it still was not the conditions I considered “desireable”.  I just took it in, enjoyed it, and saw a trail headed uphill where the cars were parked…hmmm.

I decided to take it and see where it went.  My vision was correct.  It was a trail that led to the top of the Bald River Falls.   It was in good shape as well. 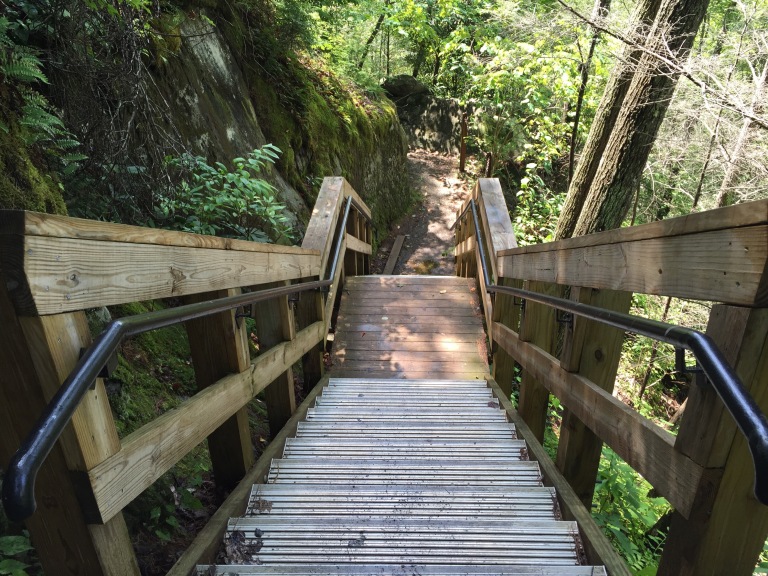 When I got to the top, I was shocked.  There were people in a smaller cascade up above sliding down it into a very small pool that led over Bald River Falls just beyond.  This was clearly not the best judgement I have ever seen.

After this, I decided to head back.  Little did I know that if I kept going upstream a little further, Middle Bald River Falls was waiting.  I guess it’s just another reason to go back.  Bald River Falls was one cool waterfall. I will definitely come plan to revisit on a cloudy week day for better shots and fewer people.

As I made my way back down River Rd towards Tellico Plains, the sky began to change, quickly.   A quick pop up shower hit and I started thinking.  I was only 3 or 4 miles from the waterfall.  I could turn around and get to experience Bald River Falls in much better conditions.  So I did.   The difference that 10 minutes makes in waterfall lighting conditions can be amazing.  I set back up, and took some more photo. 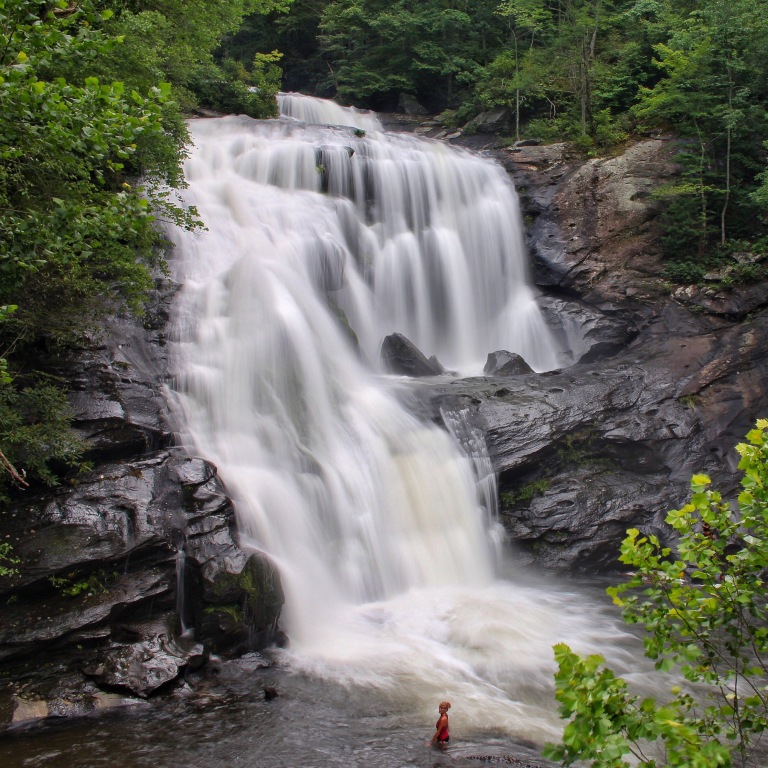 The people in the photos really help show this beauty’s true size.  The bridge is absolutely the best place to view this and you can try several angles.

6 thoughts on “The Long Road To Bald River Falls, Baby Falls, and Some Bush Beans On The Side”