I love it when a plan comes together! At the last minute, the Friday of Super Bowl Weekend, my stepfather and I decided to take a little trip to the NC Mountains Ski Country, for some Super Bowl Sunday skiing. I was hesitant of this as I have not had a pair of the thin gliders on my feet in over a decade. I wasn’t very good then, so inexperience and old age just didn’t seem to be a combination that would work in my favor. It was a chance to spend some much needed time with my stepfather, whom I have spent most of my life looking at as one of the more positive role models in my life. It was in my best interest to do this. I did suggest that he ski, I would go check out waterfalls, and we could meet up for dinner and the Super Bowl. It was not going to happen like that, either I slap the skis on or we stay home. I made the sacrifice…lol

As it turns out, the weather forecast was perfect for skiing, not something we have been able to say about our mountains in recent years, as many of my blogs featured mountain hiking in the 60’s last year. This year , the only thing approaching 60 was….well my stepfather. The forecast was for snow….1-2 inches of it and temps in the mid 30’s. It was Saturday about noon and my first challenge was getting there, as we had to drive different vehicles. No snow in the piedmont, so getting to the mountains was easy. Getting up the big mountain on US 421 was easy, once it reached the BRP and the continental divide, the flakes began falling. It would not stop snowing until after the Super Bowl sometime Sunday night. By the time I reached the place we were staying, there were already 3-4 inches on the ground, thankfully the roads were still wet, but this would change.

This was the scene as we arrived
Once there, the only plan for Saturday was to relax and go have dinner. Plans were to take a 30 minute drive to Blowing Rock, to the Timberlake Restaurant at the famous Lake Chetola Lodge. As it turns out, with snow piling up now, it took more like an hour and a half. It was certainly worth it as the food was excellent, service was great and the scene, Lake Chetola with heavy snow falling all around, large fire pits outside the lodge and the lighting was just gorgeous. 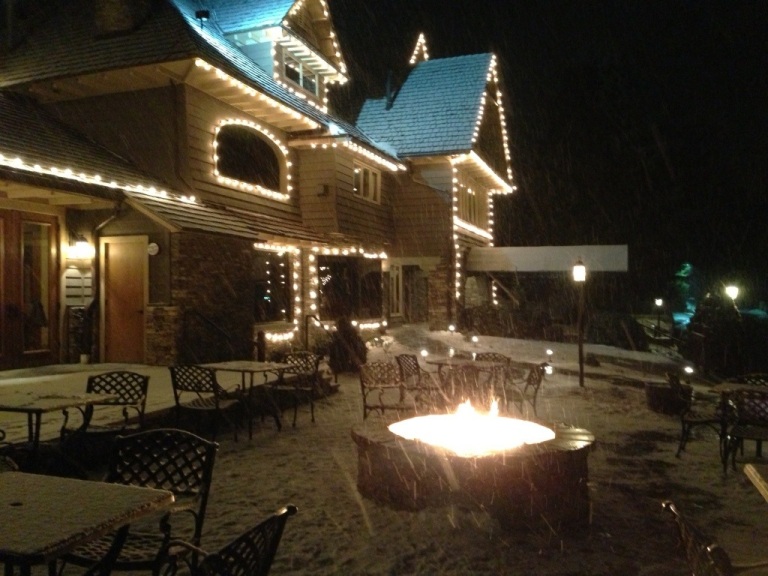 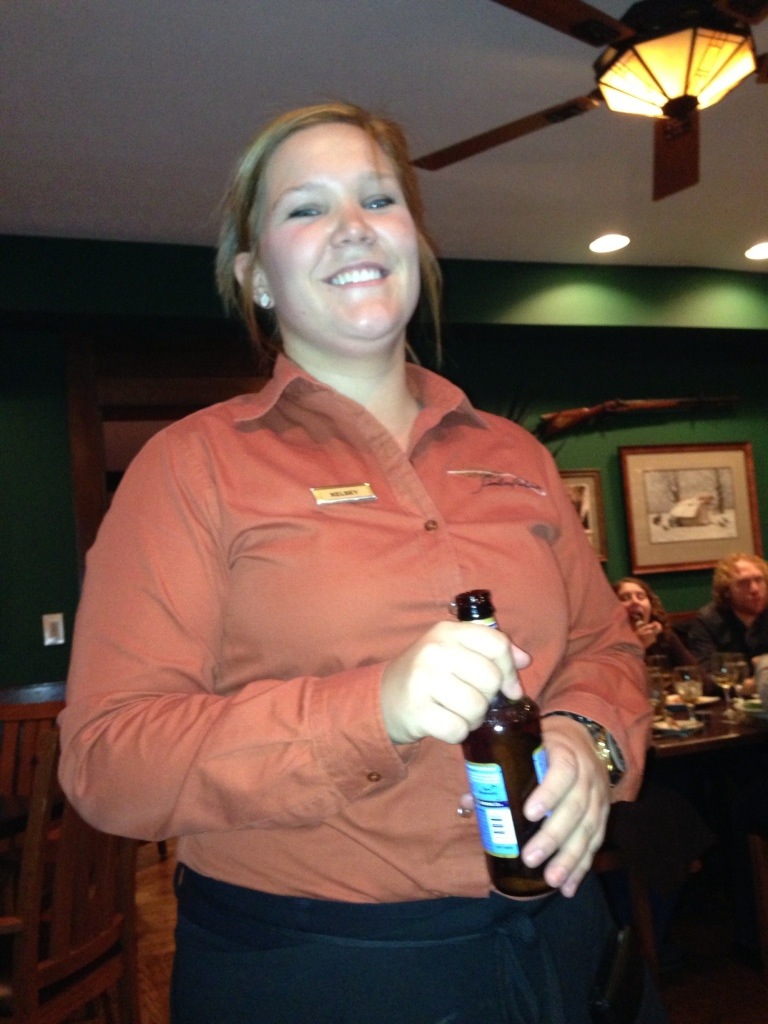 The ride home took about 2 hours, with many rear wheel drive trucks and smaller cars spinning out. It was clear now that this small upper level low pressure system that was supposed to bring a few inches was misjudged by our wonderful meteorologists. (Certainly not the first or last time that will happen). My front wheel drive car was parked and we were safely in a newer model Acura SUV that just would not slide, no matter how hard we tried. This was a good thing, because on Sunday morning, we had to climb about 2000 ft up snow covered highways to get to the 5500 ft Beech Mountain. I will add that in the mountains, even though the snow kept falling, the salt and scraping was excellent, making the roads as safe as they could be. If we ever get that kind of service here in the piedmont, kids might never miss another day…

As we made it to Beech, another problem became clear. It was now not forecast to be light snow and mid 30’s any longer, but heavy snow and sleet and low 20’s. We were now under dressed, but were not turning back. After a few anxious moments, we were off to the chair lift. Surprising after 3 runs down, no crash and burns except for a small incident getting off the chair lift the first time…..that one didn’t count. 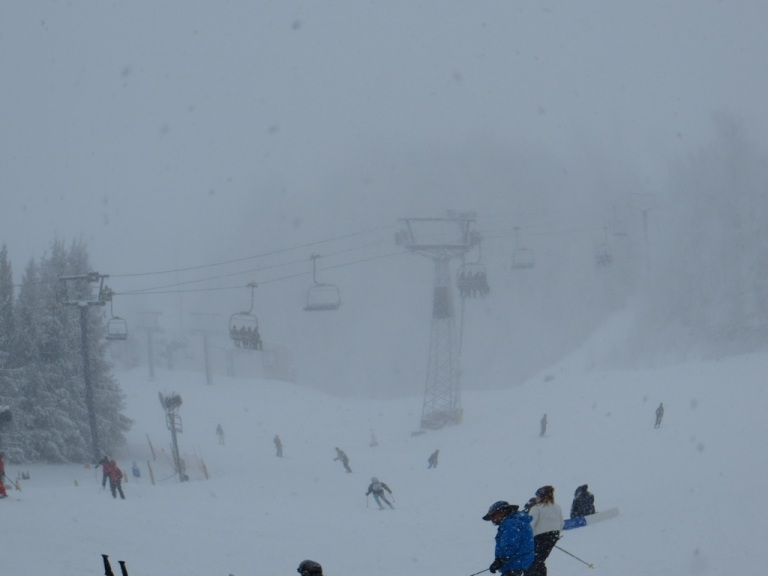 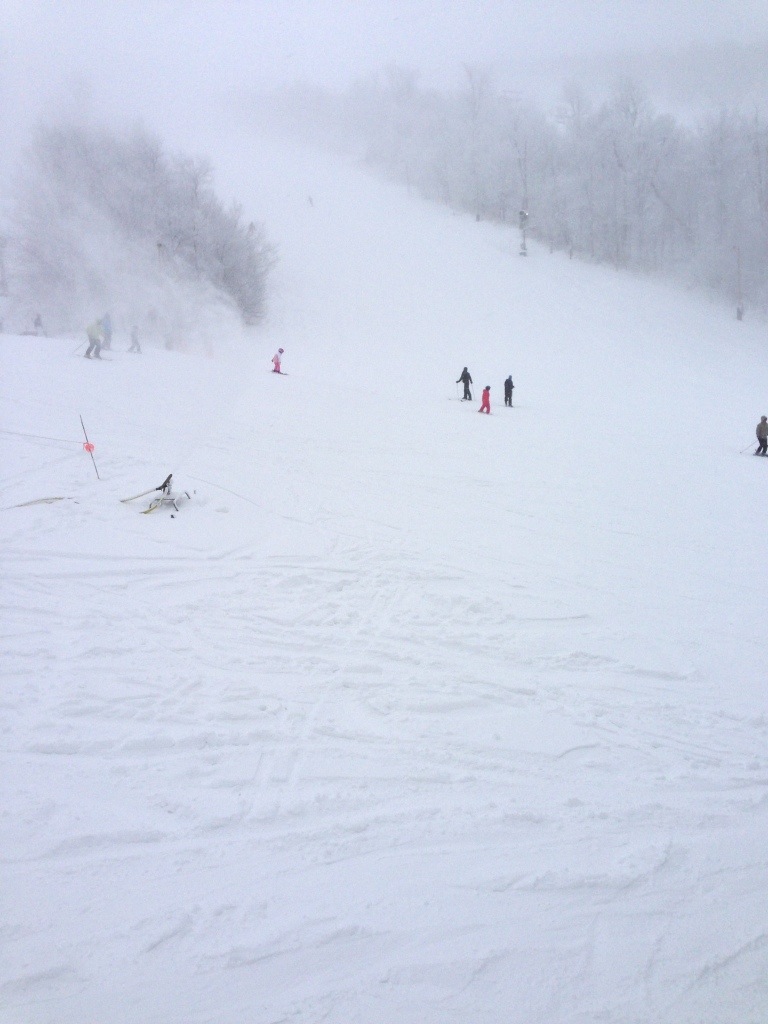 After the third run, we decided for a coffee break to warm up. We were after all the only 2 people there wearing jeans, looking like some 1990’s throwback skiers. My stepfather suggested I go for a beer to loosen me up as I had not taken many chances yet. I compromised and went for the Irish Whiskey Coffee. It warmed me all up from the inside and loosened me up on the slopes, couldn’t taste much coffee though..lol. I am certainly not promoting drinking while skiing, as 2 runs later, I had my one and only wipeout, coming down the advanced slope, where I had no business being. All in all, it was a fun experience. I claim now that I will not wait another 10 years before I go and I will look more like a skier next time..lol. Super Bowl Sunday turned out to be a great day to ski, not just because the weather, but with everyone doing their Super Bowl thing, the lift lines were nice and short with minimal waiting, not the norm for a snowy Sunday in February. As far as the Super Bowl went, I really had no interest in either team, but chose to pull for the 49’ers. Once the power went out after Beyonce’s nice show and the game being a blowout, fatigue caught up with me and I missed the comeback. Oh well!

Then came Monday, my stepfather had business in a nearby town and I had planned this day off to view and photograph some waterfalls. This was planned with the 1-2 inch forecast, not the 8-10 inch blanket that was widespread. The forecast for this day was better though, a high of 44 and no snow. While the main roads were clear by now, the side roads, the ones I need to access to get to the waterfalls were still deeply covered. This was a problem, I knew of a number of waterfalls in the area. Elk River Falls was the main one I wanted, then there is Laurel Falls near by in Tennessee, along with the Blue Hole, and Compression Falls. I could not get to any of them, I tried. Laurel Falls was an almost as there is an access on US 321 in Hampton Tn, but the parking area was too narrow with deep drop offs and several trucks in it with at least 6 inches of snow. I was not pulling in there. One slide, and I could be stuck calling a tow truck. I drove back to Newland and accessed the only waterfall I could, a three tiered falls called Waterfalls Park. It is a beautiful setting alongside US 19E across from the Ingles in Newland. A nice well maintained trail, although snow covered gets you to the top.. 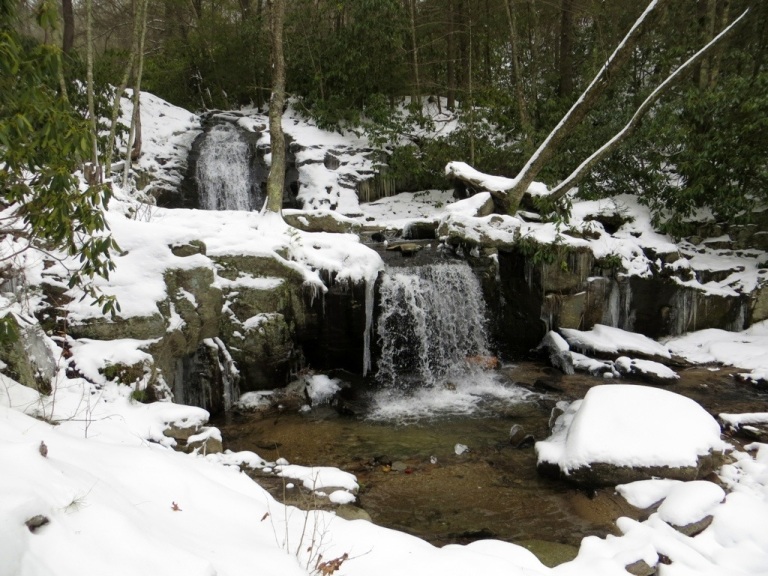 This a pretty place, water levels tend to dry up to small trickles in summer months, so seeing it full of life with all of the snow and ice was a treat. By about 12:00, the side roads were becoming clear, so I decided I was at least going to make a run for Elk River Falls. This requires a 4 mile drive off of US 19E down Elk River Road. Getting there was pretty easy, mostly down hill. I did see a few spots that was hoping would continue to melt for the return trip. Once there, the scene was gorgeous. The trail to the top of the falls, down to the bottom and making the first footprints along the long rock that sticks halfway into the river were beautiful. I did unfortunately slip on the trail down to the bottom, resulting some bruised ribs. Tennis shoes and hiking along deep snow covered trails are not recommended. 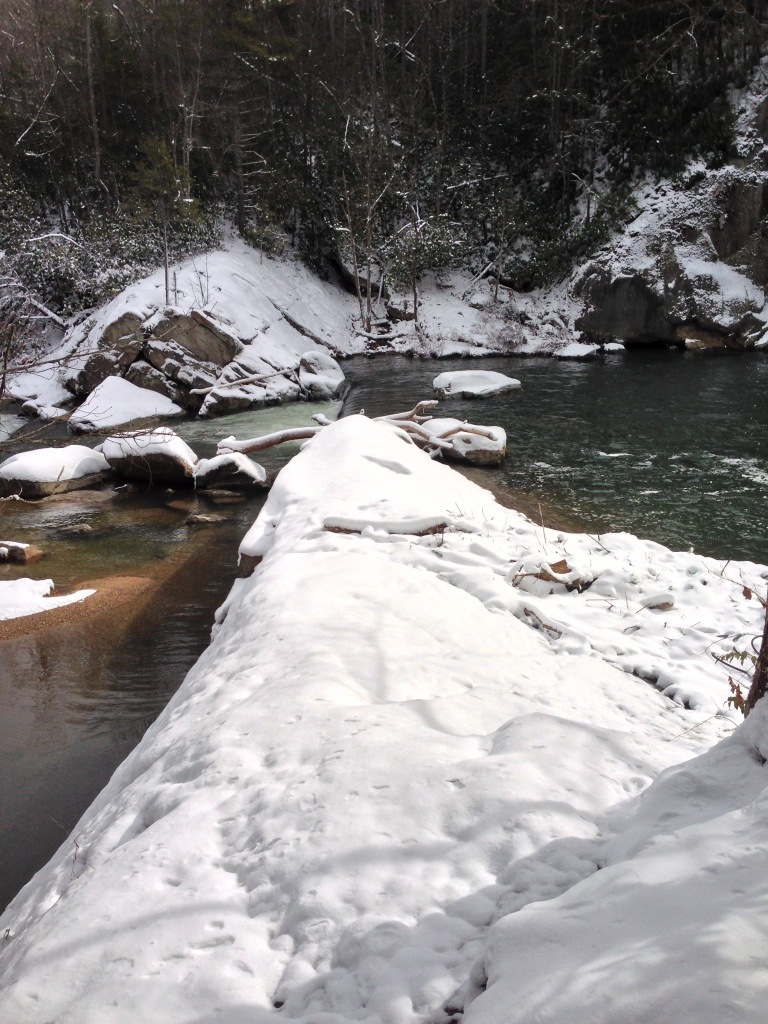 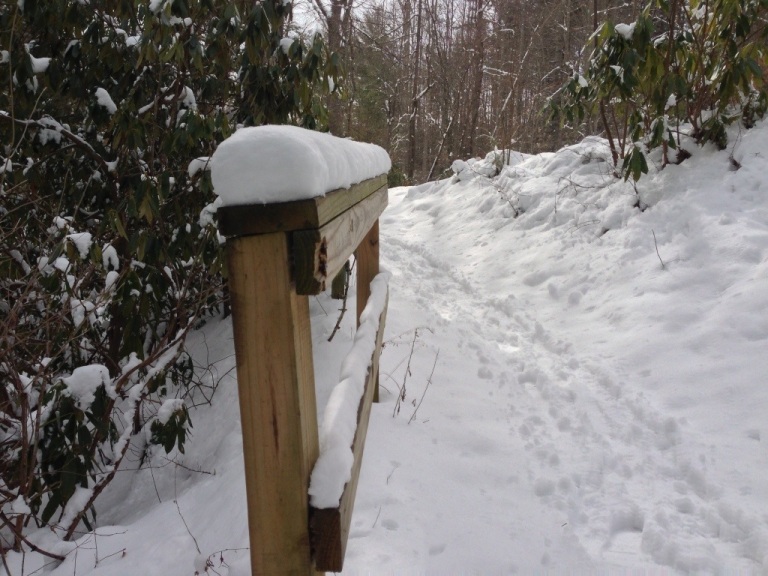 And just like that it was over. The ride back out was a tad testy, especially in the shady areas, but I made it back to the highway without issue. I made one last trip to Hampton, but still could not get in to Laurel Falls. On the way back, I stopped at Roan Mountain State Park, only to find it closed. I guess it was time to head home. On the way past Grandfather Mountain, I noticed the large sign at the corner of NC 105 and US 221 read “open today”. I did not anticipate this, had some time to kill and even a annual Grandfather Mountain pass. What should I do? Of course I went in. The steep drive to the top was not only clear of any snow or ice but dry. I was amazed. What an awesome road crew up there. This may be the one and only time in my life that I ever have the entire top of Grandfather (one of my favorite mountains) to myself, aside from the employees. The trails were closed, so was the rock on the other side of the mile high swinging bridge, but the bridge was open and I was able to see some great views. If you can get up there in winter, the views will almost always be better because of an absence of summer haze. 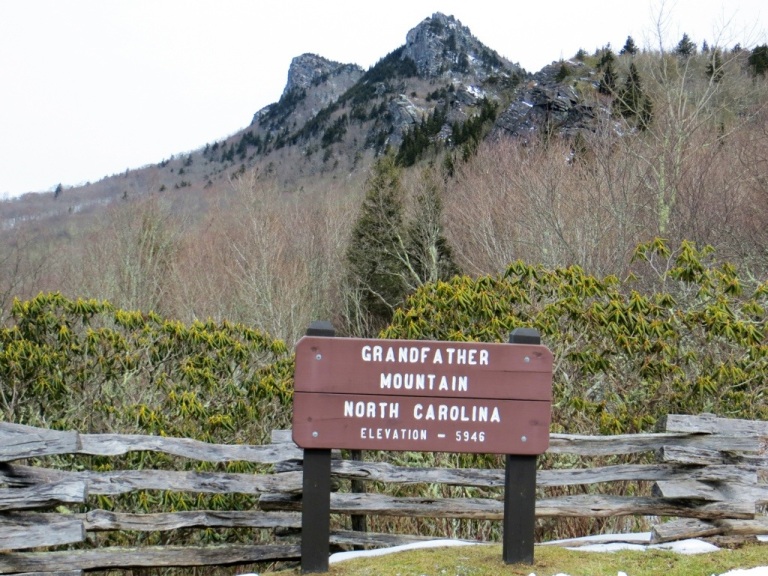 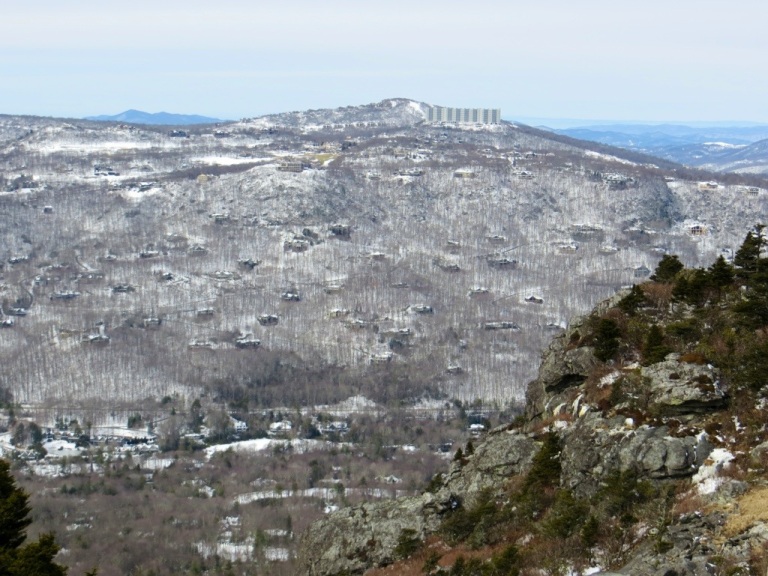 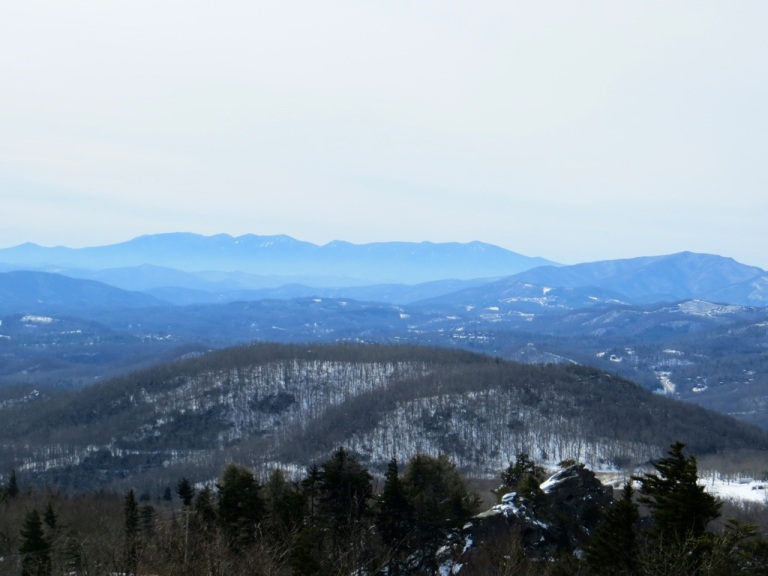 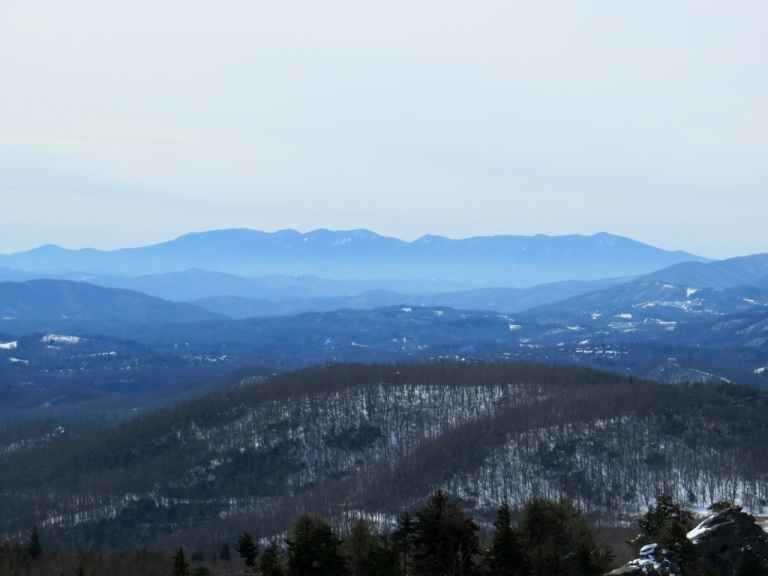 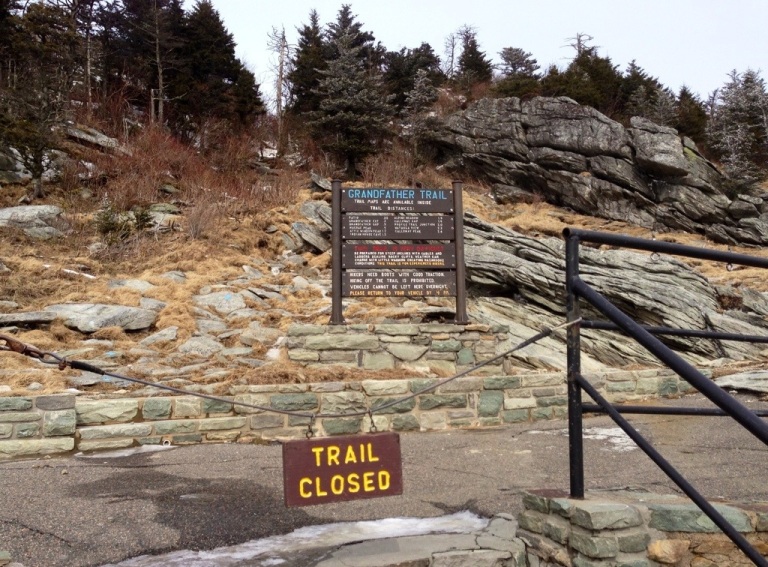 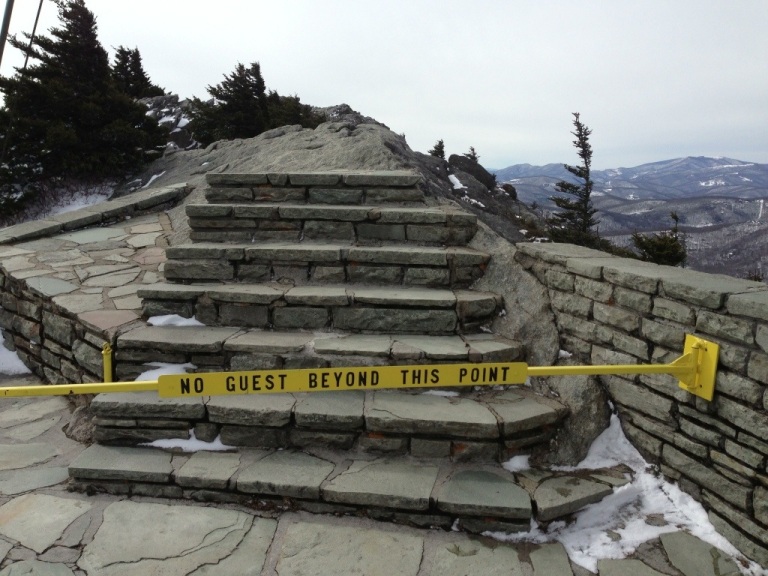 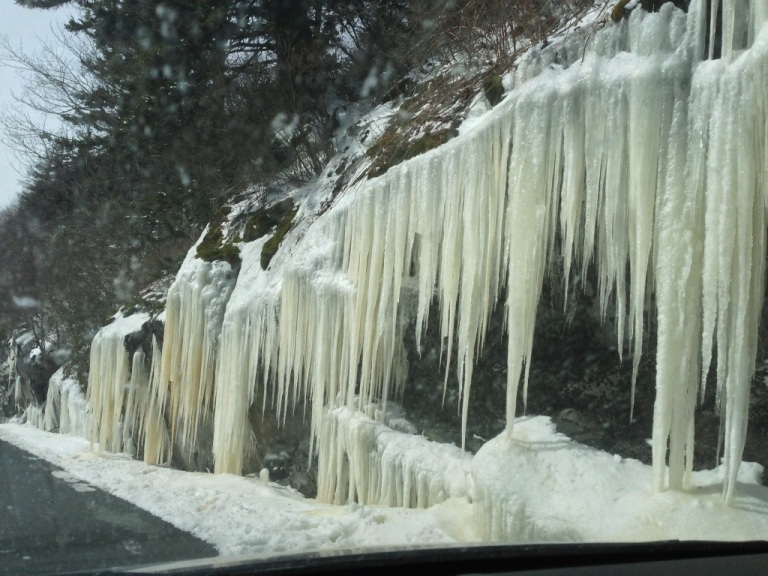 Even restricted, it was beautiful up there. I have never been up to the top when the entire world below was covered with a fresh blanket of white. It made Sugar Mountain, the large condo on top and all the houses below just shine. Table Rock and Hawksbill to the southwest stood out beautifully with their rugged peaks, the Roan Highlands to the northwest were very nice. After a nice stop in the gift store, it really was over this time. By now snow was really melting fast everywhere. I went through Boone one last time, then down the mountain and no more snow! 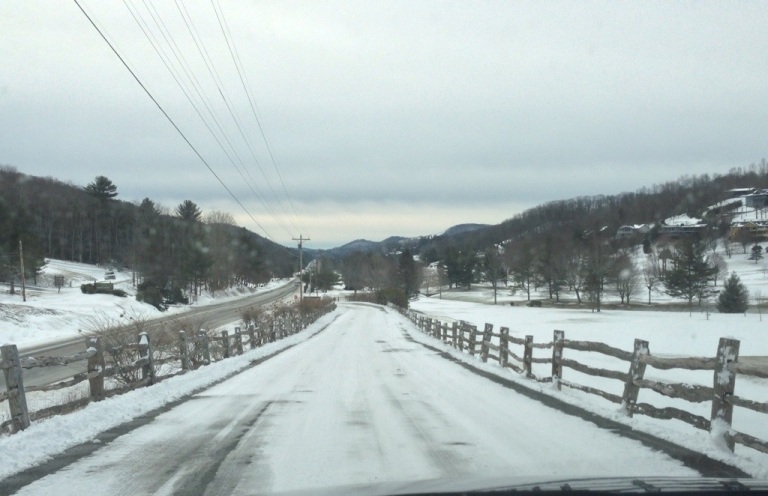 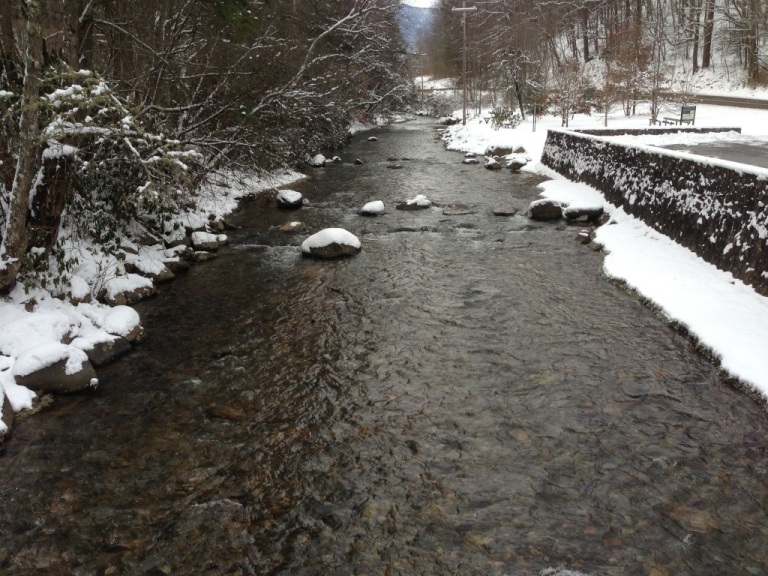 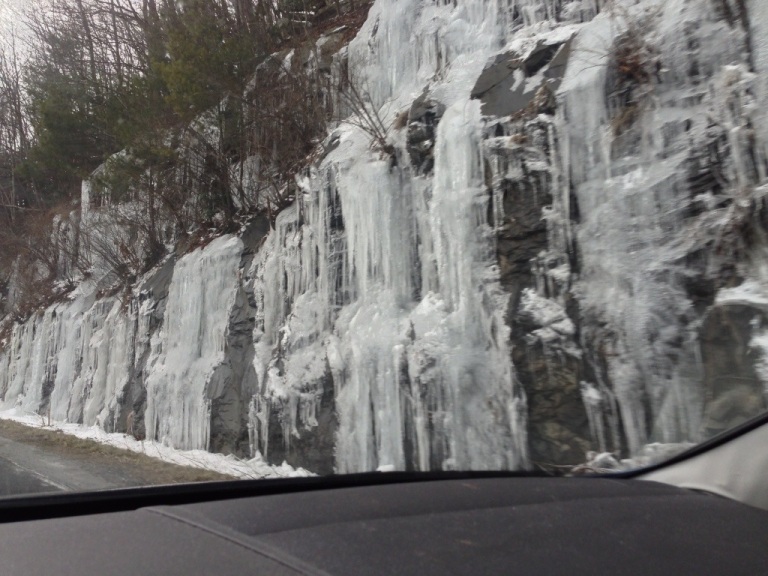 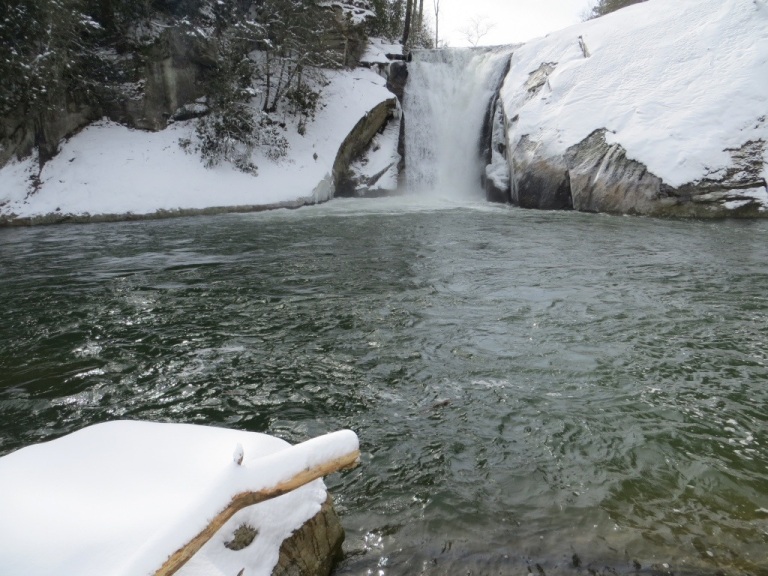 2 thoughts on “Super Bowl Weekend Skiing & A Waterfall Or Two Of Course!”